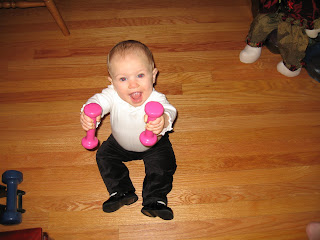 Liliana's first Thanksgiving has already come and gone. She tried a little of almost everything on my plate and seemed to like it all. We celebrated Thanksgiving with David's family at his aunt and uncle's home on Angle Lake. Liliana was one of three babies in the family who were celebrating their first Thanksgiving. Liliana, being a curious kid, picked up a set of 1 pound hand weights after dinner (I guess she wanted to work of some of those extra calories) and was holding them up and out, showing them off to anyone who would pay attention. I managed to snap a couple of photos before she held them up to high over her head and the weight carried her backwards. Her face changed from a big grin to a look of complete surprise as she tipped over and ended up lying flat on her back. After a taking a moment to let what had happened sink in, Liliana began to cry very loudly. I'm pretty sure she was more upset by the shock of what had happened than hurt.

Liliana has a seventh tooth coming in now. She decided to try out that new tooth on me one morning when I was nursing her. Let's just say that I let out a yelp, she drew blood, and I refused to nurse her for a little while after that. Luckily for her, she hasn't tried to chomp on me again because I won't hesitate to wean her instantly if she pulls that once more!

We set up our Christmas tree on Saturday. Liliana enjoys pulling the ornaments off the bottom branches, but doesn't seem to pay much attention to the tree as a whole. Luckily David and I were thinking when we purchased our decorations on our first Christmas together and bought all plastic decorations (the ones that look glass, but are kid friendly).

Liliana has begun to say, "hi" in response to others who say it to her. It sounds more like, "eye-eeee" but it is really cute. She is also waving like a champ now (before she would only wave sometimes - I guess she just had to be in the mood - but now she'll do it any time someone waves to her. Another thing she is doing is standing without support - though she gets nervous and sits down and soon as she realizes that she's doing it. It is amazing to see how much she is learning and growing. I can't believe that she's 10 and a half months old already! Time sure does fly when you're having fun.
Posted by J9 at 10:40 AM

Ahh she is adorable!