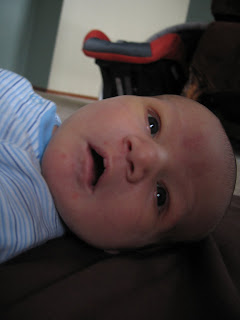 Liliana is adjusting to being a big sister fairly well. The first couple of days after we came home with Emmett, Liliana asked, "Baby brother go bye-bye?" but she understands that he's here to stay now. Liliana has really become quite the talker now. The other morning David told her to put her arms up so he could get her pj's off of her and get her dressed for the day. She pinned her arms to her sides and said, "No. Arms down. Keep the shirt on!" David and I just looked at each other and tried not to laugh. This morning Liliana saw Emmett laying on a blanket. She said, "Want the green blanket. Baby brother using it." She's really getting good at speaking in complete phrases and sentences. When we took Emmett to his doctor appointment, the nurses were surprised by how much she was pointing out in the magazine we were looking at. I was asking her how many ballerinas there were in a picture and the nurses couldn't believe she was able to count them (there were only a few), name the colors they were wearing, and correctly identify the capital letters on the page. One of them said, "That's pretty impressive for not even being three yet." I explained that Liliana isn't even two yet and she went to get the attention of one of the doctors to have him come see what Liliana was doing. I guess she's a bright child and I must be doing something right with all the reading, coloring, singing, etc. we do together!
Emmett is already proving that he can do things early too. He rolled over from his stomach to his back when he was only 5 days old. David and I couldn't believe our eyes, so we put him back on his stomach and watched him do it again. Then we grabbed the video camera to get proof and the battery was dead. Emmett rolled over a few more times when he was 13 days old and we did get some video footage of that. He's been rolling fairly regularly since then. He still doesn't roll from his back to his front and I imagine it may be some time before he does that.
Last week Liliana had an accident in the bathtub. David was sitting in the bathroom watching her and reading a book when I heard a scream and a frantic little voice cry out, "Pick you up! Pick you up!" I came into the bathroom and saw David grimace and close the shower doors while Liliana continued to freak out behind them. It suddenly dawned on me that Liliana had probably messed in the tub. David and I got Liliana and the tub all cleaned up. Now every time Liliana takes a bath, she panics at every little speck she sees floating in the tub. I'm pretty sure she won't poop in the tub again because she appears to have been traumatized by it!
So Emmett weighed 9lbs 9oz at birth and had dropped to 9lb 2oz right before we left the hospital. At his check-up at 12 days old he weighed 10lbs 10oz - that's a 24 oz jump in 12 days! I also suspect that he was mis-measured in the hospital because he was 20.75 inches when he was born and 22 and 5/8ths at his 12 day appointment and I'm pretty sure he didn't grow 2 inches in less than 2 weeks. At any rate, he is a very big boy! I think God knew Emmett needed to be a sturdy little guy to survive his older sister's love =) We love our little family and are enjoying seeing Liliana and Emmett together. I'm sure it will get even more exciting as Emmett becomes more interactive.
Posted by J9 at 11:37 AM 2 comments: