Somersaults and an imaginative mind 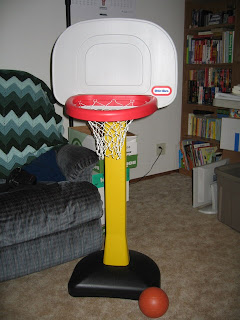 For some time now Liliana has done the "downward dog" yoga pose (stood with her bum in the air and her hands on the ground in front of her in an upside down "v" shape). About two weeks ago she was doing her yoga pose, looking through her legs, when she decided to keep going and ended up doing a full somersault. Both her grandpas were here when she did it and we all started laughing and clapping. She has done her little gymnastics trick a number of times since and seems to be quite please with herself at her new found ability.

The other day I gave Liliana some pretzels for the first time in many months. She picked up the first one, turned it sideways and said, "B!" I said, "You're right, that does look like a B". She then bit off part of one of the loops and said, "R!" I was blown away that she could not only see letters in her food, but create them. She also found "C" when all that was left was the outer curve of one of the pretzel loops. Then she picked up another pretzel, turned it loop side down and said, "bicycle - vroom vroom". She's got an imaginative mind, what can I say! Now when she wants pretzels she asks for "more B's" and plays the letter game with them every time she eats them!

The other day I was taking a shower and David was "watching" Liliana, so I closed the bathroom door to keep her from running in and out and opening the shower door on me. A few minutes into my shower, the bathroom became completely dark (our bathroom light switch is in the hallway for some reason and there are no windows in the bathroom either). I thought maybe David was teasing me, so I called out and told him just how funny I thought he was...no answer. I figured it couldn't have been Liliana because her little step-stool was shut in the bathroom with me and she isn't yet tall enough to reach the hall switches. I called out and asked that the light please be turned on so I could finish my shower and get out. After about 30 seconds the light came back on, but there was no giggling nor comments from David. Once I finished my shower and got out, I found a couch cushion in the hall under the switches. Liliana had dragged the cushion over from the living room and had been playing with the lights in the hall and bathroom. I asked David (who was working on the computer) if he had helped Liliana or even been aware of what she was doing and he hadn't even realized that she had even done that. Apparently he didn't hear me call out when I was hanging out in the dark either. He did think it was pretty funny, though. I was left a little concerned about what all Liliana may be doing when she's home alone with daddy and he's more absorbed in his computer than he cares to admit...

The other day Liliana was supposed to be taking a nap, but apparently she had more important things to do. When I walked by her room, I could hear her "singing" and after a moment I realized that she was trying to sing "Happy Birthday". I fetched David and had him listen too. He grabbed the flip video and recorded her singing (along with lovely footage of Liliana's bedroom door). I'll have him post it or a link to it so you can check it out - it's so cute! She would sing, "Happy day...yay!" and then clap. She had us giggling and her singing was just so precious.

Liliana got to hang out with her great-aunt Debbie today while I went to the temple. When I got home, I found a new Little Tikes basketball hoop and ball in the living room. Deb explained that when she took Liliana to the park, Liliana wanted to play basketball with the "big boys" - though she was likely to get squashed or make the game rather un-interesting for the guys playing - and was not going to allow herself to be redirected or distracted in any way. Deb decided to take Liliana to the store, pick her up her own basketball hoop and ball, and take it back to the park. Apparently Liliana found this to be an acceptable alternative and was quite happy playing basketball on her own hoop and with her own little ball. She has also been quite entertained with it at home all afternoon and evening. Thanks, Deb, for helping to spoil my little girl. I'm sure Liliana's grandmothers appreciate that you're taking care of some of the spoiling since they can't always do it as thoroughly as they'd like from out of state. =)
Posted by J9 at 8:09 PM No comments: